Homemade cinnamon marshmallows are straightforward to make with just a few staple ingredients and no fancy equipment. 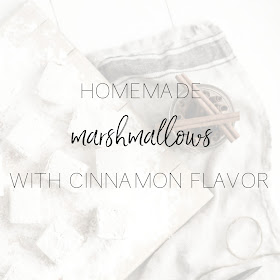 Did you know you could make your own marshmallows? When I posted on social media here and here that I had make them, a few people asked, Really? You can do that? Yes, you can. It’s actually been on my bucket list for a while to try. But I delayed, thinking that it required a candy thermometer, which I don’t have. 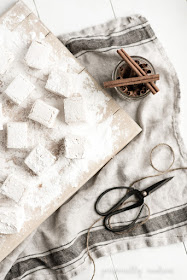 Then I came across this recipe in my Butter cookbook by the famous bakery owner, Rosie Daykin. And it doesn’t require a candy thermometer! 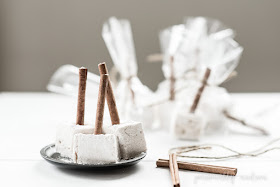 We go through a lot of marshmallows in this house, between summer campfires and winter hot chocolate. And while marshmallow will never be nutritious, I was sure we could avoid some of the chemicals in the processed, packaged marshmallows from the store. (I felt the same way about ice cream last summer, and wrote about making your own ice cream too.)  Plus... added flavourings! 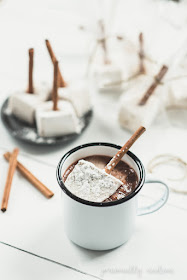 I used the basic recipe from the cookbook, then took it up a notch with one of the suggested variations by adding some cinnamon into the mix. They’ve been a big hit so far as the days have been cold and dreary, and hot chocolate by the fire is just the cure. 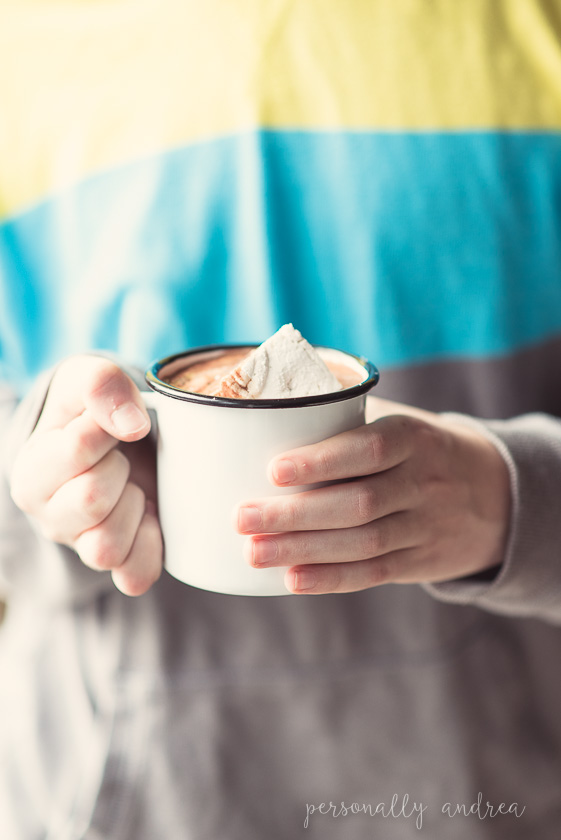 Don’t be intimidated by the number of steps in the instructions. There are a lot of details but once you get prepared and started, this is really part craft and part cooking, and pretty intuitive. 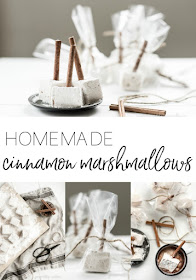 
1. Butter a 9 X 9 inch square baking pan
2. In the bowl of a stand mixer with a whisk attachment, pour in half a cup of the water and sprinkle with gelatin. Set aside to absorb.
3. In a medium saucepan, combine sugar, corn syrup, salt, and remaining half cup of water. Turn heat to high and bring to a rolling boil for one minute. Remove from heat.
4. Turn the mixer to low to stir the gelatin a few times until combined with the water. While stirring, very slowly add the hot sugar mixture, pouring down the inside edge of the bowl.
5. Turn the mixer to high and whip for 10-12 minutes, until the marshmallow batter almost triples in size and thickens.
6. Stop the mixer and add the vanilla and cinnamon. Stir to combine then whip once more for 1-2 minutes.
7. Quickly transfer the mixture to the prepared baking pan and spread evenly.
8. Grease a sheet of plastic wrap with butter or cooking spray and lay it across the top of the pan, pressing down firmly against the marshmallow mixture. Leave the marshmallows to set for several hours, or overnight.
9. Cover a large cookie sheet or cutting board with icing sugar and turn out the stiffened marshmallow mixture. Cut into one inch squares with a large sharp knife and dust to coat with the icing sugar.
10. Optional, for presentation, push a cinnamon stick into each cube and wrap with a candy wrapper, tie with twine. 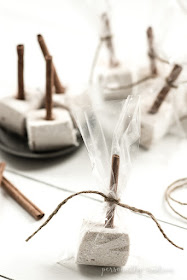 I think these will be lovely for Valentine’s Day, packaged up like this and ready for dunking.